This blog post will point out the major inaccuracies portrayed in movies about the Earth’s composition and its magnetic field.

Today (January 15, 2013) I presented a Beware of Movies lecture at a local retirement community. The focus was on the Interior of the Earth, and was the topic of an earlier blog post. It was a wonderful experience. (I love doing those things!) In the process of preparing, then delivering, the presentation, I did realize that I left a few critical things out. Hence, a new blog post!

Meteorites — What do they have to do with the Earth’s interior?

One of the big problems that arises with bad geology movies is that they get the composition of the Earth all wrong. There aren’t amethysts in the mantle. Diamonds and rubies would not co-exist. We know that the mantle of the Earth is composed of mafic and ultra-mafic rocks (think back to Bowen’s Reaction Series). That means it’s mostly low-silica, high iron and magnesium rocks down there. Even deeper, we know that the core is composed mostly of iron and nickel.

As we stand on the Earth’s surface, such minerals and rocks are rare. It’s easy to think that most of the rocks of the Earth should be felsic things like granite, with tons of quartz. This is simply not the case.

But why? How can we make the assumption that the mantle is mafic and the core is iron and nickel. We know some of this because there are a few places on Earth where mantle rocks have been exposed at the surface (usually due to tectonic events). We can hypothesize some compositions based upon how seismic waves refract through the body of the Earth (seismic waves travel at different rates through different materials).

We can make some assumptions about the overall composition of the Earth based upon studies of meteorites. We assume that the bits of rock and dust that collected all those billions of years ago to form our beloved planet formed from the same bits of rock and dust that make up meteorites. If you take a meteorite and grind it up, you find it to be of mafic composition, with low silica, and high concentrations of iron, magnesium, and nickel. Some meteorites are almost pure nickel and iron. Others are more rocky. This is assumed to be the starting point for the Earth’s composition. A polished surface of an iron meteorite – photo by Opsoelder

Over millions of years, these mafic pebbles that came together to form the planet fused, and then underwent a process called ‘differentiation,’ which is just a fancy way to say ‘the heavy stuff went to the middle.’ Thus, the nickel and iron are at the core of the Earth, surrounded by the mantle of mafic rocks. Felsic rocks, like granite, tend to be light and naturally ‘float’ to the surface, which is why they are what we usually see in the rocks around us!

The core is divided into two parts, the liquid outer and the solid inner. The mantle is also solid. Because the Earth rotates, flow is set up in the Earth’s liquid outer core. With that flow, and a little nudge, an electric current is set up. The flow is thought to be in several isolated cylinders surrounding the solid inner core. This is where the ‘bar magnet’ analogy fails, because each cylinder has it’s own field, and these combine to form the magnetic field of the Earth. This is referred to the geomagnetic dynamo. 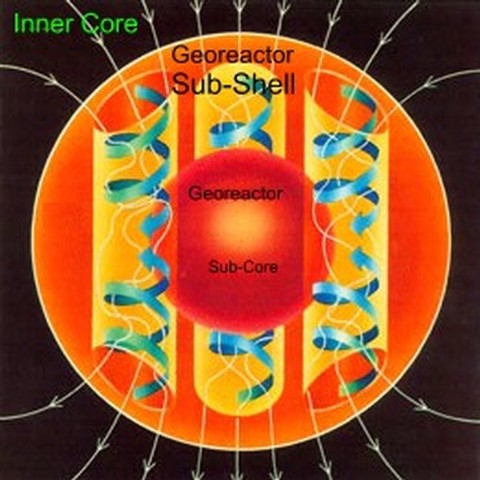 Geomagnetic dynamo. All this is happening in the core.

Because of the dynamic nature of flow in the core, the magnetic pole never quite lines up the the Earth’s rotational axis. In fact, the magnetic poles move around quite a bit, sometimes even reversing themselves (though this takes more than a single human’s lifetime). There are lots of questions regarding how the magnetic field forms and how it might reverse itself, and is an active field of research in geophysics.

Beware of movies! The basis of the entire movie “The Core” is that the flow in the liquid outer core has stopped, thus causing the Earth’s magnetic field to fail. If we did lose the magnetic field, there could be repercussions, however, the magnetic field on Earth has gone essentially to zero multiple times in Earth’s history. Every time the magnetic poles reverse themselves, the field goes to zero first. While there is some evidence that this might have caused problems for certain single-celled organisms, large animals have not been affected. The cataclysms that are shown in the movie would not be expected. So don’t worry.

3 thoughts on “Beware of Movies! Meteorites and Magnetism – More on the Earth’s Interior”