This post will point out the major inaccuracies portrayed in movies about the rest of the universe. What do we know about the other planets in the solar system, or the whole universe? How do we know this? Could there be life on other planets? If so, what would it be like?

What do we know about our closest planetary neighbors? How do we know that?

The solar system, as it’s presented these days anyway, consists of the sun, eight planets, one dwarf planet, the asteroid belt, and the Kuiper belt. The planets are divided into two categories: the four terrestrial planets (those closest to the sun, including the Earth) and the gas giants (the four planets furthest from the sun). These two groups of planets are separated from each other by the asteroid belt. Pluto, the dwarf planet, is further from the sun than any other planets. It orbits with other asteroids and rock fragments in the Kuiper belt.

Major features of our solar system

Many of our planets were discovered by simple observation of the skies through telescopes. We studied the motions of the planets across the sky and developed hypotheses about how they either revolved around the Earth or around the Sun. As our measurements got better, we noticed that sometimes the planets didn’t quite move as we expected them to. These tiny differences could be explained by the presence of other planets. And when we looked in the skies where those planets should be, we’d find them.

With more powerful telescopes and various space probes, we have now discovered all manner of objects, dwarf planets, etc in orbit around our sun. We’ve put probes on the surface of a few planets as well, and learned a great deal in the process. Let’s touch on a few interesting points.

Why do we call Mars a ‘dead’ planet?

Mars is a topic of great interest and discussion. For years, some thought (and some still do) that that was life on the red planet. There was a suspicion of huge former civilizations, evidenced by elaborate canal systems and various, strangely human features on the surface. More recent investigations, including several orbiters, probes, and rovers, have shown that Mars is lifeless and barren. The ‘canals’ were illusions caused by limitations of the available technology and the biased impressions of the viewer. We have not observed any evidence of advanced civilizations on Mars.

The canals of Mars.

We do, however, still look for evidence of life (current or extinct) on Mars. We also seek evidence of water on Mars, knowing that water is a necessary ingredient to life, as we understand it. Is the lack of obvious life on Mars the reason why we call it dead?

No, not really, though it would make sense. And we have tons of evidence that liquid water once flowed across the surface of Mars, from enormous valleys (once thought to be canals) to conglomerate layers, that can only be formed by flowing water. 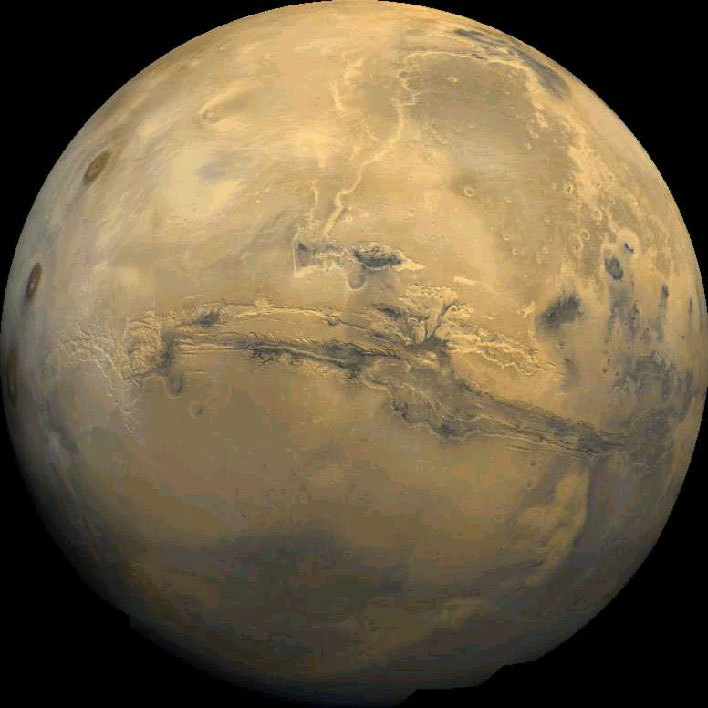 A huge valley scars the surface of Mars. Photographed by the Mariner probe.

Conglomerates on the surface of Mars photographed by the Curiosity Rover.

The main reason why Mars is considered ‘dead’ is because it lacks the tectonic activity that is unique to Earth. There are a handful of volcanoes marking Mars’ surface, but not so many and none recent enough to indicate that tectonic activity is taking place on Mars today. It is possible that Mars once hosted active tectonics. Planetary geologists believe that because Mars is so much smaller than the Earth that it quickly lost all the heat in its interior necessary to keep tectonics active.

Mars and Earth to scale. The interior structure of Mars.

Why do we call Venus our ‘sister’ planet?

As it happens, Venus is also not tectonically active. Its surface is still relatively young (~500 million years old), so potentially tectonics once existed. It’s thought that the extreme temperatures of Venus have prevented plate tectonics (as we understand them on Earth) from occurring. Read more here.

The lack of plate tectonics has also prevented Venus from having a magnetic field similar to that of Earth. Convection in the mantle, an important component in plate tectonics, also helps draw heat from the liquid outer core, which sets up flow there. It is flow in the Earth’s liquid outer core (called the geodynamo) that sets up the magnetic field.

The interior structure of Venus

Scientists do think that Venus probably has a liquid core, because of the planet’s overall similar composition to the Earth’s. Wait. How do we know that? Several probes and a couple of landers have visited Venus. Using spectroscopic methods we see that the surface of Venus is composed of silicate rocks similar to basalt. The Russian lander Venera snapped the photo below. Venus is a bleak place. 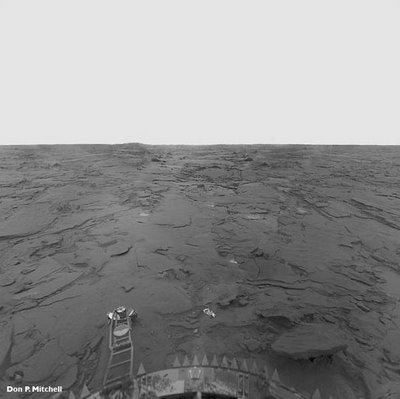 The surface of Venus taken from the Russian Venera lander.

Venus does have numerous shield volcanoes. On Earth, shield volcanoes are characteristic of mafic (basaltic) lava flows. There doesn’t seem to be much evidence for more felsic (granitic) compositions of rocks on Venus’ surface. On Earth, felsic rocks are commonly associated with plate tectonic recycling of rock. The lack of felsic rocks on Venus further supports the idea that plate tectonics are not present on Venus.

Do the giant gas planets have a solid center? I’ve heard people say that Jupiter could become a star. Is that true?

The gas giants, like Jupiter and Saturn, are mostly gas, but they do have a very small rocky core.

The interior structure of the outer planets. (Source: NASA)

Both Jupiter and Saturn are composed to a large degree by hydrogen, which is an important component of stars. It is the fusion of hydrogen into helium and heavier elements that causes stars to burn brightly in space. It is thought that Jupiter and Saturn are simply too small (not massive enough) for this fusion to start. Some estimates are that a gas giant would need to have the mass of around 13 Jupiters in order to have sufficient mass for fusion to begin.

How come Pluto isn’t considered a planet any more? What is a dwarf planet, anyway?

Hey, I grew up with nine planets, too. So why isn’t Pluto called a planet any more? Pluto is small (hence ‘dwarf’) but that’s only part of it. It’s also in a bit of a strange orbit, as part of the Kuiper Belt. What really drove scientists to start calling Pluto a dwarf planet was the discovery of several other small planets in the Kuiper Belt and the asteroid belt. Some of these small planets were bigger than Pluto, so the choice was to name some more planets (like Ceres and Eris) increasing the number of planets to 11, or relegate Pluto to dwarf planet status.

“Ours go to eleven”

The IAU (International Astronomical Union) has specific definitions for what are ‘classical’ planets and what are dwarf planets. Pluto is a dwarf.

What are ‘extra solar’ planets (aka exoplanets)?

The phrase “extra solar” refers to planets found outside of the solar system. Lest we should think our planetary system is unique in the universe, we have now found hundreds of planets beyond our solar system. Below is a plot from 2006 showing the known exoplanets at that time. The letters in circles represent the planets of our solar system. Many more have been found since.

There are several ways in which these planets can be found. The most common is the Doppler Method, which is essentially the same way we found the most distant planets in our solar system. We can look at a star in the sky and see it move slightly from the gravitational pull of planets going around it. Transits are another way we discover exoplanets. When a planet passes between us and a star, it causes the star to dim a little. Microlensing, another method, is the change in brightness of a distant star due to the gravitational pull of planets. There are several other methods as well, but these have thus far been the most productive.

Can there be life on other planets? Do we know of any?

Everybody want to know that. We spend a lot of time considering the ‘perfection’ of the Earth for the life it sustains. What makes the Earth so ‘perfect’ is, fundamentally, that we have liquid water. Any closer to the Sun, and all the water evaporates; any further away, and all the water freezes. There are a handful of exoplanets that fall into this sweetspot, and so might be habitable.

These planets were selected because where they are around their given star, they probably are in an environment where water is liquid. 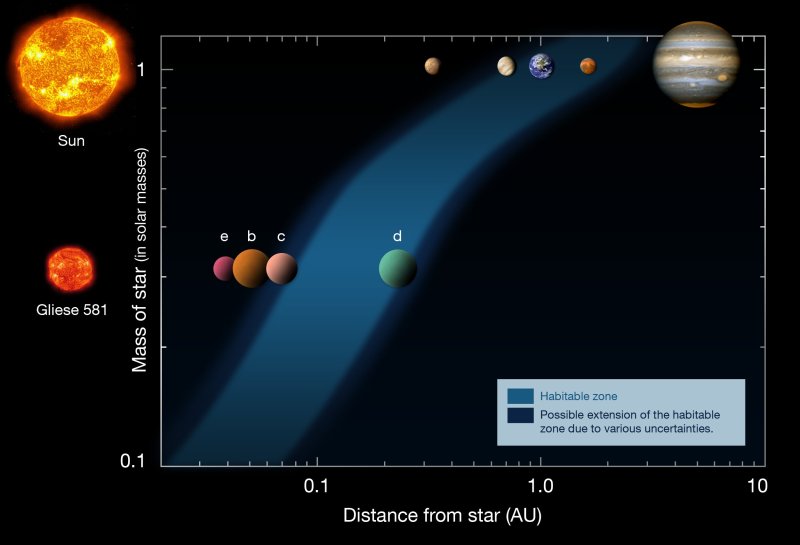 If you look at the above figure, you’ll see that Mars and Venus fall close to the sweetspot as well. Venus fails at being habitable because it has too much carbon dioxide (CO2) in its atmosphere. It’s a runaway greenhouse there. Water vaporizes right away. Mars is a little closer to the sweetspot, but lacks the greenhouse gasses to keep surface temperatures consistent and comfortable. As noted above, we do have evidence that water once flowed on the surface of Mars, which is why Mars is the focus of efforts to ‘terraform’ another planet. Some people figure that we can make it livable and go there. I keep thinking of the stories in the Martian Chronicles. I wouldn’t go there.

We aren’t thinking about colonizing any of the exoplanets that we’ve discovered, but we tend to want to focus our efforts on the ones in the water sweetspot on the assumption that those are the ones that are most likely to harbor extraterrestrial life. And we do love our aliens! Movies and TV provide all manner of fantastic creatures for us to consider.

But we need to take a step back. All our concepts about extraterrestrial life still operate on the assumption that water is everything and organisms are carbon-based and breathe oxygen. Of course, this makes sense, because that is all we know. It’s hard to conceptualize anything else, really.

The TV series Star Trek made some of the best strides toward understanding what life on other planets would be like (although they also tended to make most sentient organisms just people with horns or fins or something). Among my favorites was an episode from the original Star Trek series called “The Devil in the Dark.”

Captain Kirk faces off against the horta.

The Horta is a silicon-based life form. Whoa! Wait. What? The idea is that with silicon being so common in minerals, why wouldn’t it be a basis for life on some planet? Carbon and silicon even behave similarly as chemicals, residing one above the other on the periodic table.

The Periodic Table of the Elements.

Well, I won’t go into all the details here, because the chemistry gets complex. You can read more about it here. The short answer is that silicon-based life is unlikely. Still, how can we really conceptualize any other form of life besides carbon-based?

43 thoughts on “Beware of Movies! Other Planets, Other Worlds”