There are lots of names for it, some good, some bad: Climate Change, Global Warming, Climate-gate, The Climate Hoax. Unless you’ve had your head in the sand, you’ve heard at least one of these things. You know that there is a lot of talk about how every year seems to be warmer than the last – “the warmest on record” – and that there have been a lot of wacky weather phenomena of late, including Hurricane Sandy, heat waves in Australia and Europe, massive wildfires in the western United States. Some reports are pretty alarmist, while others claim that these are merely coincident anomalies that we only know of due to more complete modern measuring techniques and records. Some say that the Earth is warming at an alarming rate and we need to prepare for a “The Day After Tomorrow” type scenario, while others say that we have no need to worry and that it’s all hype. And really, how bad can one or two degrees of temperature increase be?

If you’ve read other posts of mine, you probably know where I stand on this. For this post, my views on the legitimacy of modern global warming are irrelevant. What I want to address here is not whether warming is occurring, but what would happen if those noisy scientists are right and we are heading toward a warmer Earth? What could the possible outcomes of a few degrees of warming be? There are models, of course, all mathematical and computerized, that show where things will get wetter or drier and such, but let’s think about something more real.

What if the hype is correct and we are warming? What will happen if we do nothing to mitigate it?

The fossil record provides an opportunity to look at past climate changes and see what effects these changes had on the animals that were alive during that time. The fossil record shows that there have been multiple episodes of global warmth in Earth’s history, much warmer than is projected as a possible outcome of today’s warming. But being warm and warming rapidly are two different things. Gradual warming occurs slowly enough that organisms can adapt. But modern warming is occurring within a single to just a few generations of animals, much too quickly for adaptation to occur. What happens then?

Does the fossil record capture any past episodes of rapid global warming? If so, what happened?

The short answer is ‘yes,’ and it was bad news for many animal groups.

The specific example I will use is the Paleocene-Eocene Thermal Maximum (PETM). This is an episode of global warming that occurred about 55 million years ago (about 10 million years after the dinosaurs went extinct). The entire PETM lasted 150,000 to 200,000 years, with the warming occurring over the span of about 10,000 years. Depending on what you read, the warming was between 5-9° Celsius (9-16° F). Compare that with modern projections of warming of 4° Celsius (or more) in a few hundred years. Warming rates are much faster today than they were at the PETM, and rates at the PETM were much, much faster than most other rates of climate change recorded in the rock record.

The warming associated with the PETM is particularly interesting for two reasons. 1) It’s thought that the warming was due to an increase in carbon dioxide in the Earth’s atmosphere, much like today’s warming. 2) Mammals were around then, and the dominant large-bodied animals living on land. We can look at the record of change in mammals at the PETM as an analogue for what might happen if modern global warming is ‘true.’ 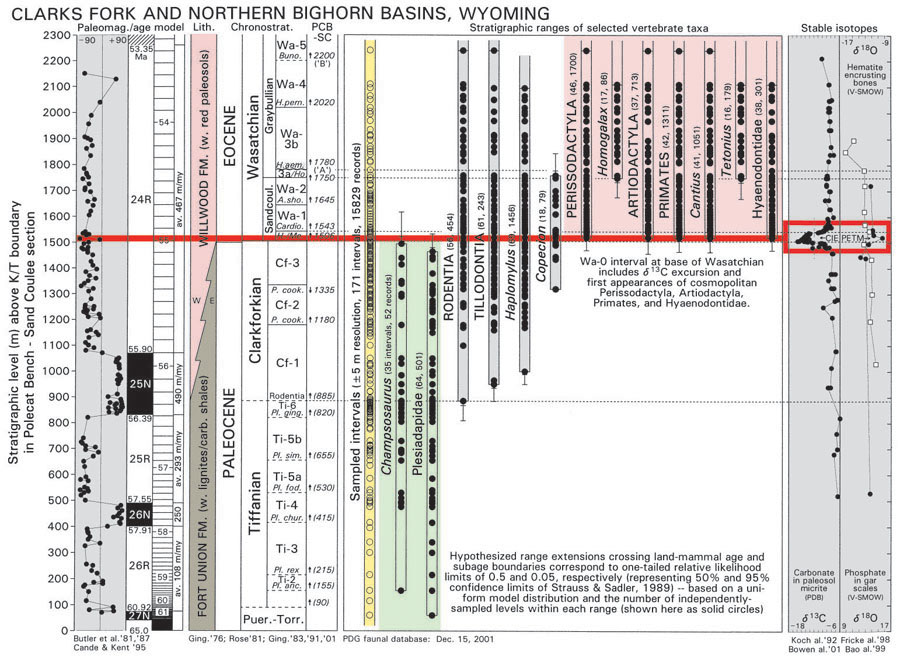 The chart above shows a lot of things. It was published in 2003 in Geological Society of America Special Paper 369. It is available here, from Philip Gingerich’s personal web page focusing on his research on the PETM. I suggest reading the entire paper to get the full context, but for the sake of this post focus only on the columns on the right hand side. There are two columns labeled ‘stable isotopes,’ and a series columns (some highlighted in green and others in red) that represent the stratigraphic ranges of specific vertebrate groups. The heavy red line marks the Paleocene-Eocene boundary, and the box in the stable isotope column encloses the isotopic evidence of the PETM – a negative spike in carbon isotopes and a positive spike in oxygen isotopes. It is the positive spike in oxygen that provides the evidence of warming. The negative spike in carbon provides information about the source of the warming (carbon dioxide in the atmosphere). The details of how the isotopes provide such information is a topic for a different blog post.

Focus now on the highlighted vertebrate groups. In green are the Plesiadapidae. Plesaidapids are a group of mammals thought be closely related to modern primates. They go extinct at the Paleocene-Eocene boundary. Modern primates, highlighted in red, appear after the Paleocene-Eocene boundary. It’s possible, then, the the PETM, was responsible for the extinction of the the plesiadapids and appearance of modern primates. Perhaps one evolved into the other, we are not sure at this point, but the loss of one and appearance of the other coincides with the PETM.

You also see, highlighted in red, the first appearance of the groups Perissodactyla and Artiodactyla. These are all the modern hoofed mammals. (Perissodactyla includes horses, rhinos, and tapirs. Everything else is in the Artiodactyla.) It is the appearance of the first perissodactyl, Sifrippus (also called Hyracotherium or Eohippus) that defines the beginning of the Wasatchian North American Land Mammal “age” which is thought to be coincident with the Paleocene-Eocene boundary. Prior to the PETM, there were no true hoofed mammals, though it’s though that the ancestors to perissodactyls and artiodactyls could be found in a group of mammals loosely called the condylarths. Condylarths dwindled after the PETM, to be replaced by the recognizable, modern groups of mammals.

Thus it’s possible that rapid global warming at the Paleocene-Eocene boundary resulted in the rapid evolution of mammalian species, resulting in the loss of many groups that had previously been dominant, and their replacement with new groups. This is a big change. This is not an example of just a few species going extinct. We’re talking about entire orders of mammals here, including the Order Primates, of which we are a member.

This post has been translated into Spanish by Jorge Moreno-Bernal, a student at the University of Nebraska-Lincoln.  See the translation here. How cool is that?

52 thoughts on “The Paleocene-Eocene Thermal Maximum – Is Modern Global Warming Anything to Worry About?”