In September of 2011, NASA sent two small spacecraft into the orbit of the Moon. Nicknamed Ebb and Flow, these two tiny craft shared the same orbit, and remained in continuous contact with each other. The mission was called GRAIL (Gravity Recovery and Interior Laboratory), and the purpose was to measure minute fluctuations of the Moon’s gravitational field by precisely measuring changes in the relative velocities of the two spacecraft. 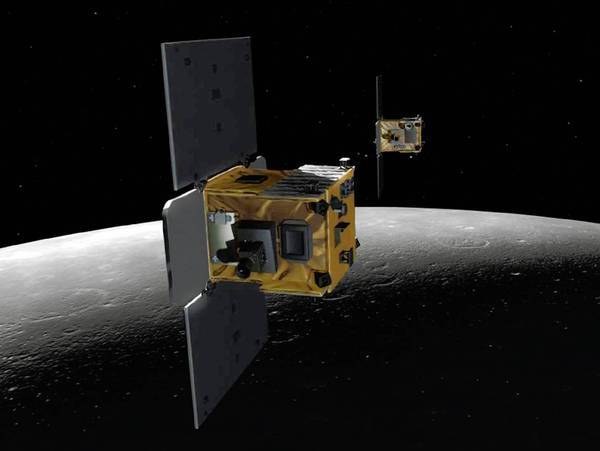 The two GRAIL satellites, Ebb and Flow. This is an artist’s depiction. Bulk Density of the Lunar Highlands – courtesy of GRAIL

The mission ended on Monday, December 17, 2012, when Ebb and Flow were purposely sent to impact the Moon near its north pole. The craft were no longer at a sufficient altitude to continue scientific study and had not fuel remaining to gain the needed altitude. The impact site was named after the late astronaut Sally K. Ride, who was America’s first woman in space.

I think Sarcastic Rover said it all when the impacts were confirmed and the mission was officially over:

After seeing what NASA does to robots who complete their mission, I promise not to finish a single damn thing on Mars.

Speaking of things flying through space (and somehow appropriate given the recent reviews I’ve written about asteroid impact movies):

The asteroid is called 4179 Toutatis, and was ‘videoed’ when it passed by Earth on December 12 and 13 at a distance of about 4.3 million miles (or 18 times farther than the Moon).

An image of Toutatis

THE WORLD IS NOT GOING TO END TODAY.

It’s already tomorrow in some places. I don’t think we need to worry.

Or maybe we should:

Sorry everyone, running a bit late.